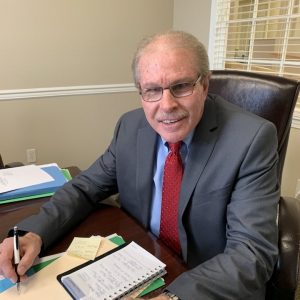 Billy W. Sherrow is a native of Lancaster, Garrard County, Kentucky. He graduated from Eastern Kentucky University in 1965, with a degree in accounting and from the University of Kentucky College of Law in 1972 with a Juris Doctorate. He was the managing member of the firm of Geralds, Moloney & Jones until 2003, when he became a founding member of Sherrow, Schrader & Sutherland, PSC. The name was changed to Sherrow, Sutherland & Associates, PSC in January 2007, when John P. Schrader was elected to the bench as a Circuit Judge. He has concentrated much of his practice in the area of real estate and closes several hundred residential and commercial transactions each year. The firm’s real estate department is familiar with all forms of residential loans, including FHA, VA and conventional, and is approved by most major lenders as well as local banks. He has also acted as local counsel and written title insurance policies for several multi-million dollar commercial transactions in the Lexington area. He represents the Lexington-Bluegrass Association of Realtors and has spoken at numerous continuing legal education seminars on the subject of titles and title insurance issues. He recently served a two year term as chairman of the Real Estate Section of the Kentucky Bar Association.

In addition to the area of real estate, he also practices in the area of wills and estate planning, probate and business organization law. His outside activities include being a member of the board of directors of The Southland Association and being instrumental in starting the Southland Jamboree, a free bluegrass music concert that has grown steadily since 2006, and has become one of Lexington’s premier music attractions during the summer months. Other outside activities include golf and music. He is married to Jeri and they have three children and eight grandchildren.

Use the contact form below to give us more information about you and your case and we will get back to you as soon as possible. Please note that there is no client-attorney relationship until we agree to accept your case.