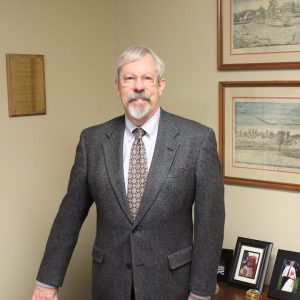 John P. Schrader grew up in Lexington, Kentucky, and after having graduated from the University of Kentucky College of Law in 1979, he enjoyed 27 years as an attorney in private practice before becoming a Family Court Judge. He was a partner in the firm of Geralds, Jones, Sherrow and Schrader before being a co-founder of Sherrow, Schrader & Sutherland in 2003. As a family court lawyer, he developed an unprecedented process using Legal Separation to help couples in crisis save their marriages.

In addition to his work in family court, he served for 27 years on the Board of Directors and as the attorney for the Greater Lexington Apartment Association. He served as a lobbyist for the multi-housing industry before the Kentucky General Assembly and the LFUCG Council and represented hundreds of apartment owners and managers in both transactional work and litigation. For a number of years, he also represented several insurance companies, and their insureds, in a variety of personal injury cases. Before the prevalence of mediation, he tried dozens of personal injury and other types of cases before juries throughout Eastern and Central Kentucky. He was named Outstanding Young Lexingtonian by the Lexington Jaycees in 1990, and received the Citizen-Lawyer Award from the Fayette County Bar Association “In Recognition of Distinguished Civic Activity and Exemplary Legal Service to His Clients and the Bar” in 2000.

In 2006, he was elected to serve as a Fayette Family Court Judge. He is certified as a graduate of the training offered by the prestigious Child Abuse and Neglect Institute. He has received a Continuing Legal Education Award from the Kentucky Bar Association, having completed over 370 hours of continuing judicial education during his tenure as judge. He served on the Race Community Child Welfare (RCCW) Committee to help eliminate racial disparity in the courts. He drafted many forms and materials now used by the courts, and by litigants who appear in the courts. He served as Chairman of the Advisory Council and was a frequent speaker for Youth Alert, a non-profit organization dedicated to the reduction of violence and bullying by youth through education. He has presented professional programs to Family Court lawyers and the entire Fayette County Bar Association on suicide prevention, state and local rules enacted each year by the courts, domestic violence, bullying, racial disparity in psychological testing, and many others. He has also made presentations to many civic and men’s church groups as he worked to develop character and morals in young men in the community.

In addition to handling thousands of Family Court cases each year as a Judge, he created and presided over the innovative Fayette County Veterans Treatment Court. In this program, Judge Schrader helped many noble and courageous veterans overcome problems associated with Post-Traumatic Stress and severe substance abuse such that they now live clean and sober lives as productive citizens in our community. Through his leadership, the court was awarded a $350,000 grant from the Bureau of Justice Administration which is used to continue and expand the programs he created and implemented.

He served on the Veterans Taskforce of the Kentucky Access to Justice Commission. He created the innovative Lawcare4vets, a program which uses over 90 lawyers he recruited to mentor University of Kentucky law students and provide pro bono services for indigent veterans.

Having completed his term on the bench in 2014, Judge Schrader is pleased to return to private practice with his friends at 200 Southland Drive, Lexington, Kentucky. He completed the Family Court Mediator training offered by the Administrative Office of the Courts and uses his creative problem-solving and experience on the bench to help families resolve disputes in a peaceful and mutually agreeable manner. He is also available to represent parties in matters pertaining to family law, will contests, probate, landlord-tenant, homeowner associations, motor vehicle accidents and personal injury cases, and otherwise, and to continue to serve veterans and others in our community as opportunities arise.

Use the contact form below to give us more information about you and your case and we will get back to you as soon as possible. Please note that there is no client-attorney relationship until we agree to accept your case.